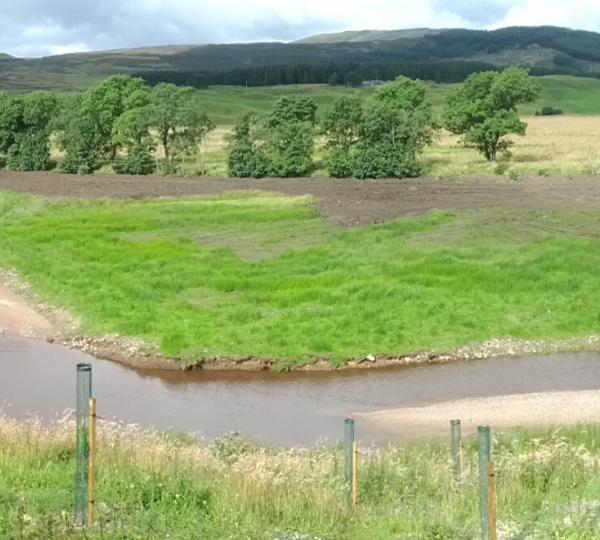 The Rottal Burn is a tributary of the River South Esk, located in Angus, North East Scotland. The South Esk is designated a Special Area of Conservation (SAC) under the European Habitats Directive, for its populations of Atlantic salmon and freshwater pearl mussel. Catchment management is delivered via the River South Esk Catchment Management Plan (CMP).

The Rottal Burn catchment is located to the eastern end Glen Clova. The catchment is comprised of rolling hills (~900m) covered with grass heather mosaics managed for shooting, stalking and upland livestock farming. There are also areas of plantation forestry and small areas of native woodland. In it’s lower reaches the Burn had previously been straightened and dredged reducing general biodiversity and changing the natural flow regime.

The Rottal Burn in the South Esk Catchment was re-meandered in 2012. During the project 1100m of new channel plus backwaters was created, connection to wetlands was established, and 2000 native trees were planted.

The project aimed to restore the Rottal Burn to a more naturalised state to enable it to increase its general biodiversity potential, primarily to support functional populations of salmon and trout, and potentially to deliver habitat suitable for freshwater pearl mussels. It was anticipated that the morphological changes would also reduce the sediment load mobilised during high flow events (and subsequently deposited in the lower reaches) encouraging a more natural flow regime.

The work was carried out during April – August 2012. Materials were sourced from the local estate; existing gravel banks embankments were redistributed and woody debris, in the form of windblown Scots pine trees with root balls, came from estate woodland. The work was carried out in two phases. The new channel was constructed and profiled and the form allowed to stabilise before the flow was then diverted from the canalised system.

Since 2012, stakeholders and researchers have worked together to support multiple student projects which collectively provide a broad evidence base for the restoration benefits. The projects have monitored morphological and ecological change over 6 years as the system has matured. This site provides a rare example of an unconstrained restored channel, reconnected to its floodplain. The project has successful stakeholder, landowner and agency collaboration, coupled with research and monitoring impact. Research and student involvement is directly informing the next generation of engineers and environmentalists (via Abertay University and other Scottish universities).