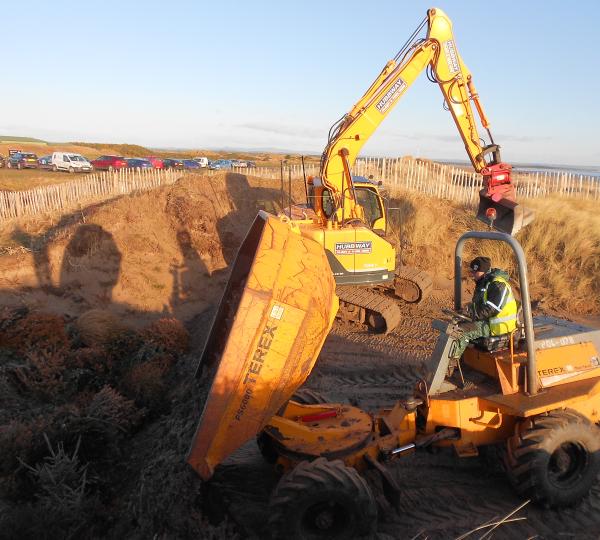 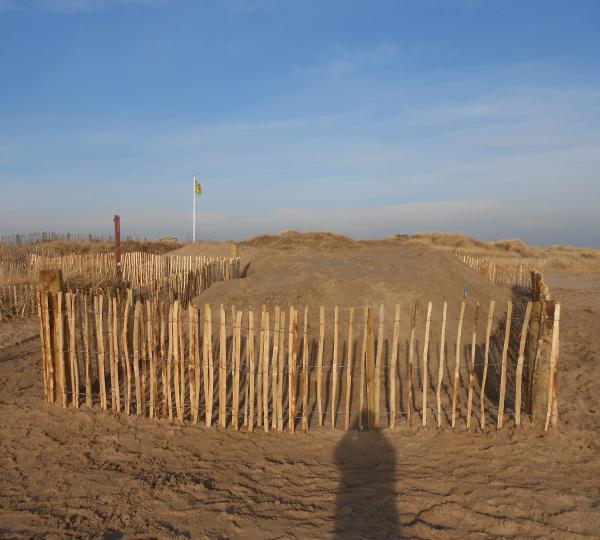 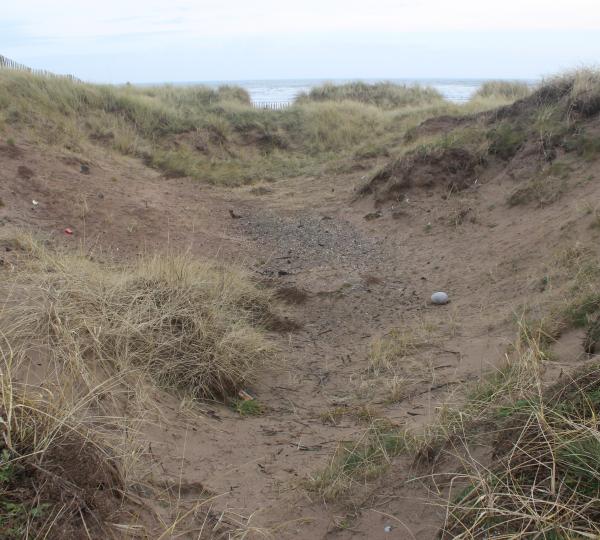 The West sands beach at St Andrews is part of a stretch of natural (undefended) coastline, in North East Scotland.  The beach area is backed by a large expanse of sand dunes which provide natural protection from high tides and rising sea levels to the amenities, farmland and recreational assets beyond them. The dunes are part of the Eden Estuary Site of Special Scientific Interest (SSSI) and the Firth of Tay and Eden Estuary Special Area of Conservation (SAC).

In 2010 a storm surge breached parts of the dune system and flooded farmland and golf courses.  The West Sands Partnership (made up of relevant organisations and interest group) formed and provided a forum for discussion about the potential for NFM approaches to manage erosion and flood risk within the dune system.

In 2012 The West Sands Partnership agreed and published the Management Plan for the West Sands, St Andrews, from 2012-2025.

In 2010 a large scale dune restoration project was completed at West Sands Beach, St Andrews.  Due to the location of the site in the SAC, it’s designation within an SSSI and Natura 2000 site; all work had to ensure conservation objectives were met. Preliminary work to determine and map the sediment patterns and grain size distributions within the dunes and intertidal area was crucial to the long term viability and success of the project. A “donor” site was identified that could withstand periodic sediment extraction without suffering long term consequences. Tens of thousands of tons of sand sourced from this area were used to re-profile the dunes. Eroded sections of dune were re-instated. Access routes were re-laid and sand fencing was installed. Volunteers planted marram grass to stabilize the dune system in the longer term.

The natural processes of deposition and erosion within the dune system will continue to take place and the recharged dune areas will re-supply sediments back to the foreshore where they will eventually be returned to the donor site.  For the long term sustainability of the restoration work some management is necessary, however the project has been designed to be as “self –sustaining” as possible.

The original funding for this work was via the INTERREG Sustainable Coastal Development in Practice (SUSCOD) fund.  Ongoing funding is provided by local council budgets; however the key input continues to be the machinery, man power and expertise provided by St Andrews Links Trust. Volunteer groups spend time assisting with suitable tasks, for example planting lyme and marram grass and removing invasive species.

Ongoing and broader changes in management practices include;

•Boardwalks and signed dune paths to deter the creation of ad hoc paths and allow clear access routes from the car park to the beach.

•Manual litter picking has replaced mechanical beach cleaning which means that the top layer of sand, including seaweed is left behind.   This change in practice helps to preserve the nests of ground nesting birds, and provide natural obstacles around which sand can deposit, grasses colonize and ultimately new dunes develop.

•Large areas of the beach, notably Outhead, are fenced off and closed to vehicles, reducing erosion and disturbance to wildlife.

•From 2013, sheep have been used to graze grass at Outhead instead of undertaking an annual grass cut.

•From 2018 new sand dunes have been placed at three larger access points through the dunes in such a position to shield and protect back dune and infrastructure from direct tidal flooding.

Monitoring carried out by Fife Coast and Countryside Trust (FCCT) has shown that since mechanical beach cleaning stopped Ringed Plovers have been breeding successfully at Outhead for the first time since 2005.

Monitoring by Scottish Natural Heritage under their site condition monitoring noted in 2016 that the dunes were ‘recovering’ which is attributed to processes augmented by the restoration project.

A key element for long term success of this project has been the understanding between all partners that this restorative work is likely to be required for many years if not indefinitely. As such the project partners have accepted that dune restoration is part of the site management in the mid to longer term.